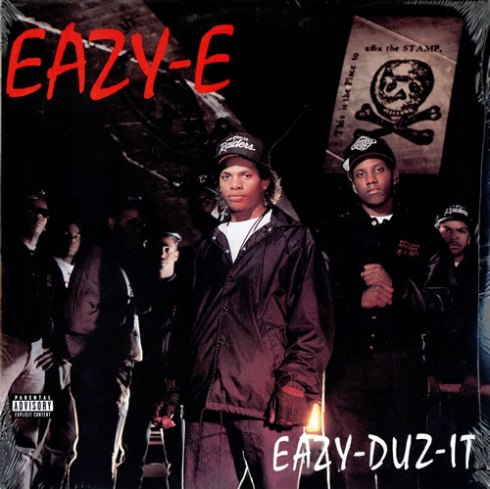 Eazy-Duz-It is the first album by retired crack dealer turned Ruthless label boss/rapper Eric “Eazy-E” Wright, as well as the first N.W.A offshoot. Eazy-E’s debut album follows Straight Outta Compton a month after its release.  By the logic of the music industry Eazy-Duz-It should’ve been pushed far into 1989 as to not hurt Straight Outta Compton‘s record sales. But  on the always unconventional Ruthless Records no such consideration seems to have been made here.

On with the review, Dre and Yella’s beats are dense, dusty and funky as they were the last time around and Eazy recites Cube, Ren and D.O.C.’s writings over them with the mischievous joy of a street-smart man-child. His high-pitched wine is best described as a thugged-out version of Sam Cooke and the mixture of boasting and threatning is over-the-top enough for anyone but the C. Delores Tuckers and the Bill O’Reilly’s of the world (or however may have filled his shoes back in ’88) to get the joke, or at the very least get that there’s a joke being made. As usual; Joke’s on Bill.

A major difference between Straight Outta Compton and Eazy-Duz-It is that since technically Eazy is the worst rapper in the world’s most dangerous group, but also the biggest character; he does best setting the mood rather than discussing serious shit, and that’s probably why are no profound statements being made such as on Fuck the Police or Express Yourself. Basically Eazy-Duz-It is Eric Wright taking no shit but talking a lot himself for twelve tracks long and it’s all the better for it.

There’s party-starters such as We Want Eazy, Eazy-Er Said than Dunn, there’s conceptual raps No More ?’s which takes place in an interview-setting, and Nobody Move which is about performing stick-ups. There’s even a profanity-free song for the radio titled Radio (One thing you can’t accuse N.W.A of is hiding their intentions or mislabeling their songs.) And it all forms an exciting, never boring and well-rounded album.

Finally Eazy-Duz-It makes N.W.A and the Posse completely obsolete by taking the one song that actually sounded good that wasn’t on Straight Outta Compton already. That would be Boyz In da Hood.

Eazy-Duz-It isn’t for the faint-hearted, drugs, misogyny, guns and other street shit is being glorified and Eazy is willfully immoral throughout, but if you don’t take this album too seriously you can have a lot of fun with it. What keeps these staple-subjects of hip-hop interesting is Eazy’s undeniable charisma and his distictive delivery. It’s a shame he wouldn’t put out another full-length solo-album before his untimely death in 1995.