N.W.A and the Posse may not be a very good album, but its selling of 500 thousand+ copies made it known to record labels that there was an audience for Eazy-E, Ice Cube, MC Ren, Dr. Dre and DJ Yella, even though their lyrics contained more than a bit of profanity. What it didn’t do however, was prepare the world for gangsta rap crossing over to the mainstream.

Which is exactly what happened following the release of N.W.A’s real debut album: Straight outta Compton.

Funky and mischievous, well produced and accessible yet uncompromising in its creators’ beliefs and opinions N.W.A’s true debut Straight Outta Compton is gangsta rap at its very best.

With wall-to-wall production by Dr. Dre, aided by DJ Yella and with raps written by Ice Cube, MC Ren and the D.O.C. and performed by Cube, Ren, Dre and the alpha male in a group that consists of nothing but alpha males; Eazy-E, Straight Outta Compton may not have been gangsta rap’s starting point (at least Schooly D and Ice T and perhaps more rappers preceeded it)  but it is the album that singlehandedly brought the rap subgenre to the masses without the aid of Radio/MTV airplay (Raegan era media weren’t to keen on airing  cursing and references to sex, drugs and violence), as white suburban kids found it perfect for pissing off their parents.

That’s not to say controversy is all it has going for it. Far from it, Dre and Yella’s dense funky beats never fail to make one’s foot tap and are the perfect backdrops for Eazy, Cube, Ren and Dre to go rampant over. Although it’s dated because of how goddamn monumental it is, today, 24+ years after its august ’88 release it still sounds completely fresh.

Off course not everything has aged equally well. Fuck the Police is still a fine rap song as ever and the subject of corrupt racist pighead policemen is current still, but the controversy it stirred up upon release, the motherfucking FBI even sent this rap group a letter requesting them to tone it down, is hard to imagine today, taking away at least some of the impact this once had.

Other subjects than bad experiences with racist police include, but aren’t limited to representing your hometown (the title track and Compton’s N The House), the poor quality of the recording output of unnamed rivaling hip-hop groups (Something Like That), free speech (Express Yourself) and Eazy-E’s favourite beverage (8-Ball).

Unlike on follow-up albums the vibe is rowdy but good-natured throughout because although a shitload of threats and bragging get put to wax, it is all nonspecific enough to not dis any of the listeners personally. (Well maybe except for cops listening to Fuck the Police.)

Eazy’s high-pitched whine is irresistable as ever throughout, Ice Cube records one of the first Gold Digger songs ever and Ren proves he is a criminally underrated rapper on his solo-shot If It Ain’t Ruff.

This album beats the life out of N.W.A and the Posse, shits on it and runs off with its valuables 8ball and Dope Man, after which Eazy-E’s solo debut follows suit and cleans up by including Boys in da Hood.

The only track that doesn’t work is the Panic Zone reprise late ’80s electro-funk-rap Something 2 Dance 2, which isn’t because it sucks completely, but rather because it sounds completely out-of-place.

Straight Outta Compton is some really great stuff for those who like unadultered rap music which likes to pretend the radio doesn’t exist.

But the rest doesn’t fall far behind. Straight Outta Compton is rather consistent.

Recommendations
Buy this album, even if you aren’t inclined to like rap music, chances are you will like this album.

Various artists – N.W.A. and the Posse 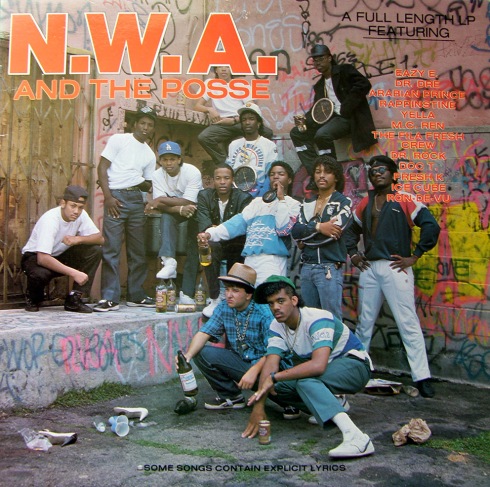 Never conventional N.W.A’s debut album is barely an album at all, but rather a collection of random-ass songs. Off course what are you expect when your ghetto-ass record label scraps some singles together and releases the fucker without your permission while you are on tour? This album is surely dominated by N.W.A with seven of the eleven tracks featuring some involvement by either the whole group or Eazy. It should be noted that most of the N.W.A tracks featured here would end up in superior remix capacity on either Str8 Outta Compton or Eazy’s Eazy-Duz-It.

Another notable act on here is the Fila Fresh Crew, which counted the D.O.C. among it’s ranks. As a whole this is a shoddy but promising album, but… the promising bit may just be retrospect talking. The sound is primitive and the songs are silly. Songs like L.A. Is the Place and Fat Girl, feature Eazy-E even giddier than usual spitting over some of the shittiest beatboxing since the dawn of hip-hop. Panic Zone is shitty Africa Bambaata impression.

The fact that all of the decent tracks are featured on other, better albums in better incarnations makes this one of the more inessential curiosity pieces out there. Unless you are a devout N.W.A stan who must own all things Eazy, you can just skip this one entirely and just start with Straight Outta Compton. It wouldn’t surprise me if not even Dr. Dre owns a copy of this anymore.

Recommendations
Go listen to Straight Outta Compton and Eazy-Duz-It, not this,