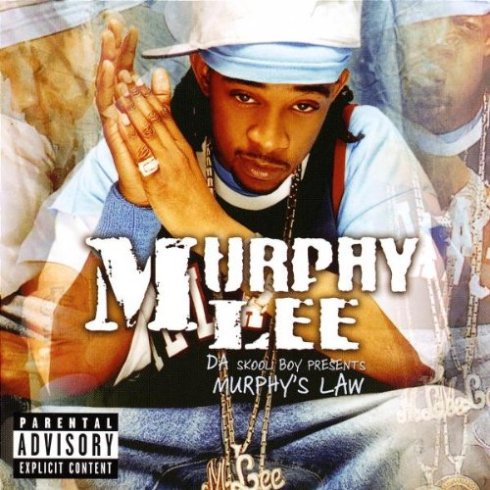 Taking about the common rapper’s habit of landing all their homies from the hood a record deal as soon as they’ve sold a couple of records: it certainly has lead to a lot of mediocre to shitty albums being recorded and released. It’s almost as though for every entertaining Jay-Z record being released to the public a waste of time, money and hard drive space by Memphis Bleek gets to see the light of day.
Some times however a weed carrier has some actual skill behind the microphone and gets to become a cool supporting character in story of his more famous friend’s career. Such is the case with Nelly’s homeboy Murphy Lee(a.k.a. Da Skoolboy because he was the youngest out of the St. Lunatics posse), the second out of Nelly’s St. Lunatics posse with a solo career (third if you count Nelly himself) whose debut Murphy’s Law hit shelves in late 2003.

Although I can’t recall him so much as appearing on Country Grammar or Free City his guest verses on Ali’s moderate hit Boughetto and the remix of State Property’s Roc the Mic that appeared on Nellyville were pretty cool. However it wasn’t until the song Shake Ya Tailfeather off the Bad Boys II soundtrack dropped in the summer of ’03 that anyone in the public actually started wonderng who he was. The song was mostly Nelly’s, but also had a verse by P. Daddy (Because the soundtrack was released on Bad Boy Records and because that way Nelly wouldn’t have to pay for the video.) The final verse was Murphy’s though and arguably he stole the show, referencing Dragonball Z , Marvin Gaye and Voltron while talking about weed and pussy. That turned out a fantastic career move because Shake Ya Tailfeather hit worldwide charts like a brick and won a grammy for ‘best rap song by a duo or a group’ in 2004. It is this sort of success that gets the label heads to ‘see the potential’ and spend a little extra on beats and guest appearances when an album release is imminent, which was good for him since guest verses and hooks by Sleepy Brown and a littler Lil Wayne (amended by as a myriad of lesser-knowns), as well as assists by Jazze Pha, Jermaine Dupri, Mannie Fresh and Lil Jon are a definite asset when recording a party rap record like Murphy’s Law (That title was a given, wasn’t it?)

The album did go platinum, but that’s quite likely only because it had Shake Ya Tailfeather on it. I don’t recall ever hearing anything else of this being played on any radio or music video channels. Oh well, I’m sure Murphy Lee isn’t complaining.

His on-record persona is that of a nouveau riche street rascal that is just as likeable as his similar but more famous homie Nelly. Besides their boughetto similarities there are differences too, Murphy Lee is a much mellower dude. Nelly is the type of dude to slap the listener around the dancefloor with his success. Murphy seems to preoccupied with entertaining himself behind the mic for such posturing. Off course he brags himself through this album the way any commercial sub-gangsta rapper would in ’03, but he doesn’t land a sweaty, poon fest of a club banger like Hot In Herre or Work It or a thug utopia like Nellyville anwhere (except on Shake Ya Tailfeather which is the former, but it’s more of a Nelly song anyway). In stead he offers up a milder variety of midwestern party rap. Murphy’s Law is heavy on the poppy R&B cuts, midtempo Southern/ Midwestern party rap and it even has a smooth elevator jazz number in Cool With It.
Highlights include the album opener Don’t Blow It featuring incarcarated ‘tics member City Spud, the rowdy, Nelly assisted Mannie Fresh-produced banger Hold Up, Jazze Pha’s feverish come on-number Luv Me Baby, the uncharactaristically smooth St. Lunatics posse cut Cool With It, the reminiscent I Better Go featuring Avery Storm, the requisite ‘the money hasn’t changed me’ song Same Ol’ Dirty and off course the classic hit single Shake Ya Tailfeather.

Unfortunately the album has it’s fair share of clunkers too. The smooth seduction number Grandpa Gametight never gets to seductive because of its inexplicable, silly concept. As does What the Hook Gon’ Be. This Goes Out might as well be called Nationwide Weedcarriers ’03 what with (Kurupt’s little brother) Roscoe, Cardan (formerly of Ma$e’s group Harlem World) and a pre-stardom Lil Wayne appearing alongside Murphy Lee, Nelly and Lil  Jonathan. Murphy Lee is a silly sex rap with a female singer yelling out our hosts name to the tune of Marvin Gaye’s Mercy Mercy Me (The Ecology) and you can imagine how hard that shit falls flat on its face.

The remainder of the songs lands somewhere in between of good and bad right in the middle of meh. Nelly and Murphy Lee would’ve done well to leave a fair share of these songs on the cutting room floor as they weigh down Murphy’s Law significantly. But this has been the case with every St. Lunatics release so far so that was to be expected. As it is this is still a rather entertaining but flawed album by a very likeable rapper who knows his limitations, doesn’t try too hard and appears to only be out to entertain both himself and the listener. Kind of like how Country Grammar and Nellyville were. And if you enjoyed those albums Murphy’s Law is definitely for you.

Recommendations
Pick up a used copy. Or a new one even as long as you’re not hideously overcharged for it.