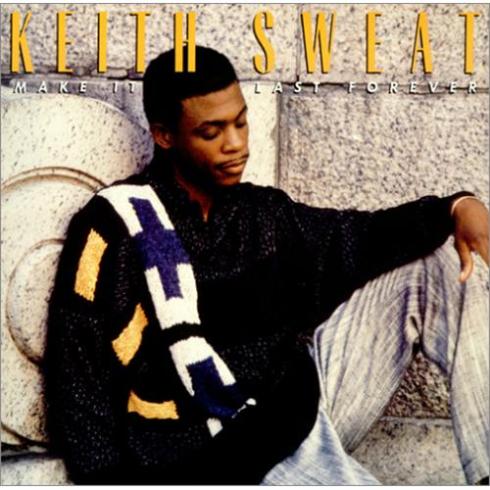 Keith Sweat’s Make It Last Forever is often seen as the startingj point of New Jack Swing, the musical genre that first succesfully blended soul-styled vocals with hip-hop styled beats, but that’s only because Teddy Riley is behind the boards. This album is in fact simply a quiet storm album on which nobody plays actual instrument beyond Teddy and the off keyboard. The only thing that ties this to the hip-hop of 1987 is the use of the same tinny drum machine clatter and the same sparkly keyboards one might find on a Heavy D album, only this time around they’re used to create something for the ladies, not the B-boys.

With that said, it is a really good quiet storm album. Keith’s yearning tenor is a terrific instrument and blends well with Riley’s beats which go back-and-forth between ballads (Right and a Wrong Way, Tell Me It’s Me That You Want, Make It Last Forever, In the Rain, How Deep Is Your Love) and midtempo funk numbers (Something Just Ain’t Right, I Want Her, Don’t Stop Your Love).

Make It Last Forever is instantly datable to 1987, but not in a corny or bad manner. The songwriting may be a little too earnest and lacking in the four letter word and house beats-departments for many a modern R&B aficianado but its old fashioned charm may just be what Chris Brown’s output is lacking for others.

The guest appearances are kept to a minimum (no rappers here) so these fourty minutes, divided into eight tracks are quite sufficient to get to know Keith and watch him drop a couple of classics in the mean time, most notably the title track and I Want Her.
Keeping the album brief has the advantage of making you want even more when the album is done spinning, and isn’t that what a guy called Keith Sweat should strive to achieve?

Recommendations
Pick this one up. 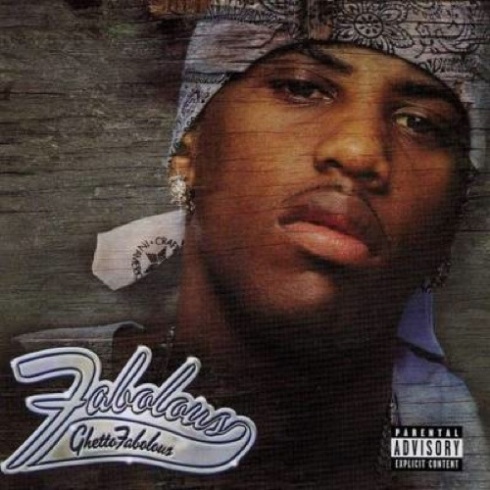 Another rap album that dropped on that uneventful date (september 11, 2001) was Roc-a-Fella Records’ house DJ, DJ Clue?’s protégé Fabolous’ Ghetto Fabolous, although the fact that this shit actually came out may have done more damage than the 9/11 attacks. Fabolous’ debut is anything but fab, although I’ll be the first to admit that the man himself is almost entirely blameless.

Fab had been making a name for himself ever since he first appeared on a major label realease (DJ Clue?’s own major label debut the Professional) with his lackadasical, monotone flow (which got him compared to blingy cuddly-gangsta turned preacher Ma$e) and his funny/corny punchlines (which got him compared, a lot more flatteringly, to the likes of Big L)
The album had two songs that were moderately succesful on the U.S. charts back in 2001 (Can’t Deny It and Young’n (Holla Back)) but there’s really only one single sort of, kind of related to this album that people occasionally still listen to, which is the glossy Puff Diddy-featuring remix of Trade It All released on the soundtrack to the Ice Cube movie Barbershop.

Still this album could be considered a commercial success since it had moved over a million units by 2003, which was the time Fabby started having some real charts success with singles off his sophomore album, on which he emulated Ja Rule (who makes an appearance on Ghetto Fabolous), romantically dueting female R&B singers Lil’ Mo and Tamia over bootylicious beats.
Except unlike Jeffrey Fab brought his punchlines with him to these radio songs and knew better than to sing the refrains on his own material and in stead let the hired help do that. This is probably what saved him from the sort of riducule Ja would endure as soon as the hit songs stopped coming.
But I digress, suffice to say that this album earned its platinum plaque probably not because of its own merits, but rather because his 2003 album Street Dreams hit the jackpot and people in record stores (yes people bought actual physical copies of music they liked in stores, as late as 2003) picked this one up since they were there and expected Ghetto Fabolous to be another album of Into Yous and Can’t Let You Gos. I’m sure the people who bought Ghetto Fabolous for this reason  were pissed when they actually listened to it. (Street Dreams itself was hardly all acoustic guitars and Commodores-interpolations either, but we’ll get to that soon enough.)

Clue? and his cohort DURO, his colleague mixtape jackass DJ Envy, as well as relative unknowns Rush da Spyda, Omen, Armando Colon produce most of Ghetto Fabolous, and they don’t do a particularly good job, serving up overly glossy store brand imitations of what East Coast hip-hop tended to sound like at the time, that are too clean to be hard and too incomplete to be poppy (somewhat sketchy beats are what marred the first two installments of Clue?’s the Professional series. And it’s no different here.)
Surprisingly the Neptunes contribution and second single Youngn (Holla Back) is boring as hell too. I’m quite confident Pharrell and Chad don’t remember having ever made it. Maybe Clue? stole it out of their reject-bin while the guys were having an argument.
Get Right, Ma’ Be Easy and Right Now and Later On‘s beats were made on sleep walking strolls too, except this time by Rockwilder, Just Blaze and Timbaland respectively.
Can’t Deny It has Rick Rock selling Fab the exact same boring-ass beat he reused several times on most of his Dynasty contributions (I bet he charged full price too) while the usually reliable Nate Dogg jacks an old 2pac hook over it to meh results.

The other guests don’t add much either, Ja Rule gives Ride For This a DMX-esque overly shouty hook.
Lil’ Mo does that early naughties thing where an R&B singer jacks an old hook of a soul song (In this case I Wonder If I Take You Home by Lisa Lisa & Cult Jam and Full Force) and goes out of his/her way to gangsta it’s lyrics up (In this case by unnaturally jamming the word “thug” into it). Yuck.
Speaking of uninspired, unneccesary gangstaness; Bad Guy has Roc-a-Fella skit-personality getting his bullshit Scarface on between Fab’s verses. It wasn’t funny on Reasonable Doubt and it still wasn’t on Ghetto Fabolous.

The only exception to this is Jagged Edge who give Fabby’s ode to a special lady a sunny hook over an uncharacteristically nice Clue?/DURO beat. It’s not quite as groovy as the Barbershop version, but it comes close and it compensates by not having that wack P. Daddy verse. Regardless it’s Ghetto Fabolous best song, hands down, it’s also the most pop (coincidence?)

As for Fab’s rapping, he is obviously a more than competent punchline rapper, one not devoid of pop appeal either, which is something Canibus or Big L can’t say about themselves. That’s not to say he doesn’t make any beginners mistakes. For instance he all but reuses the same outdated (it wasn’t even fresh in ’01 when Ghetto Fabolous dropped) New Jack City punchline on the album’s first two songs. Also the guy uses the same “swallow my babies” line on two of this album’s songs. This kind of fuckery makes Clue? come across as a sloppy executive producer and Fab as an uninspired rapper. Keeping in line with the corny movies-references; Leathal Weapon gets namedropped on Keeping It Gangsta as well. Not that referencing old movies is a major offence in and by itself (Although rappers, including Fab on this album, definitely overdid it with the Scarface-enacting. And the next rapper who goes and pulls that shit on his album needs to get his recording contract torn-up. One could quote the entire movie verbatim without having ever seen it if one has heard enough rap albums from the ’95-’05 timespan.), but as a running theme it makes it seem as though Fabby hadn’t entered a cinema in the decade prior to relesing his debut album, in which case movie-references may not be a good idea at all.
While he stays on beat and doesn’t fuckup majorly that often besides the minor offences dropping the occasional cheesy clunker of a punchline and tired gangsta’ism, but over these shitty beats he sounds like a complete tool, even if he simultaneously does show his ability to write actual songs as opposed to srings of bad jokes while keeping his style consistent, which isn’t exactly a given with rappers, especially punchline rappers.

Despite Fab having considerable talents there is absolutely no reason to revisit Ghetto Fabolous, an album that gives off a promise of a pretty decent sequel on the condition that the guy cops some proficient production, but has absoloutely nothing else going for it.

Best track
Trade It All